By Michael Cline on 11.12.20 in Carolina Demographics, Migration

“The folks in here in Leland embrace growth. It’s exciting to watch. For a number of years it was residential growth, but the last five years we’re seeing more commercial and retail,” says Assistant Town Manager Niel Brooks, who joined town staff in 2006 when the rapid growth was already underway. “We’re a relatively young town and there’s always been a vision for growth. We’ve tried to be ready for it. There’s a way to grow that is smart and also takes into account resident feedback and community traditions.”

Leland benefits from having characteristics favorable to population growth— proximity to a fast-growing major city (Wilmington) and location near coastal recreational areas favored by retirees.  However, it is not alone in growth. Across the state, most municipalities added population over the decade, with just 34 percent (187 municipalities) losing population from April 1, 2010 to July 1, 2019 (See Table 1).

A municipality is a local government authorized by the General Assembly to provide certain services, make and enforce laws, and collect taxes within a geographically defined area. Municipalities may be called villages, towns, or cities and may be located within one or more counties. 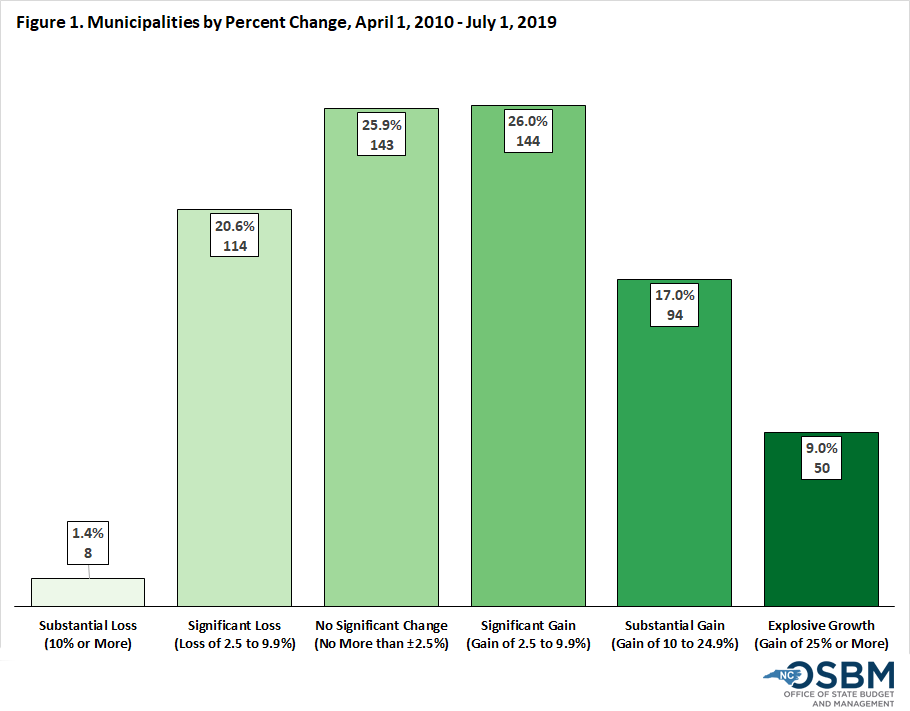 Rapid population growth, for instance a doubling in the size of a municipality’s population over a short period, can bring about challenges for meeting the infrastructure needs of a rapidly changing community. So far, at least as indicated by our estimates, no city in North Carolina has doubled in size over the past decade, although a few have come close (Table 2). 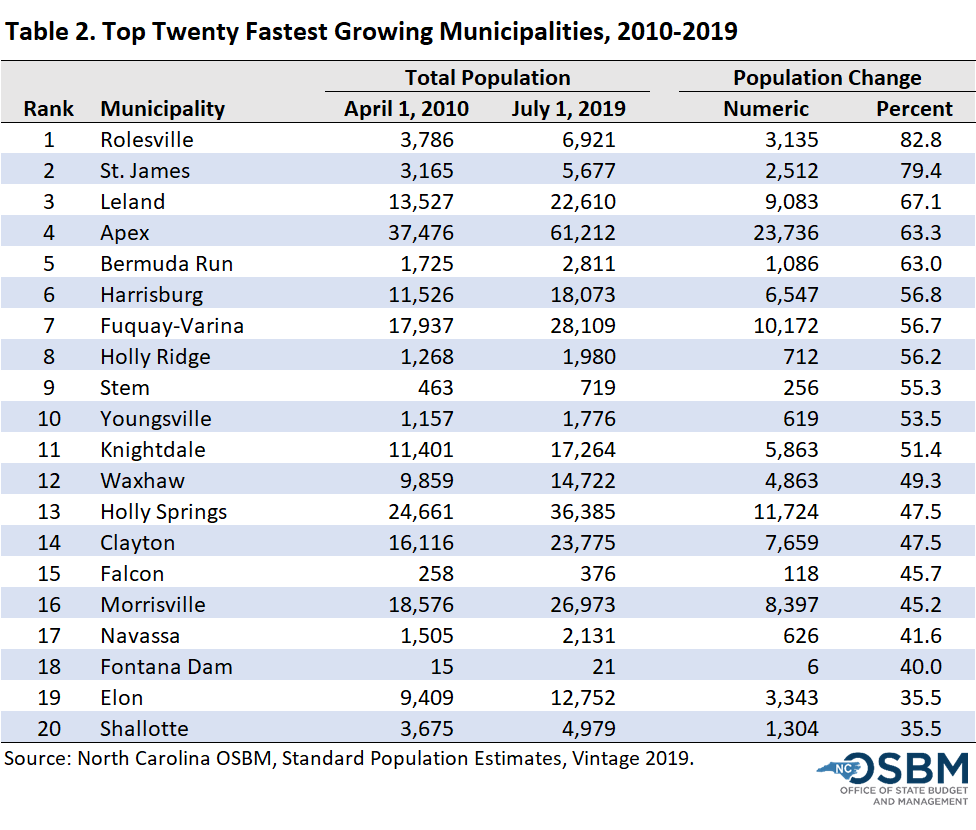 These rates of growth can challenge how local governments plan for and finance needed roads, water and wastewater systems, and other community services. Population losses challenge communities in a different way – services need to be adjusted to provide for a smaller population while at the same time maintain and finance infrastructure originally built to serve a larger population.

Most of the towns that made the list of Top Twenty Fastest Growing Municipalities (Table 2) are suburban or exurban communities in or near the fastest growing metropolitan areas of the state, including: St. James, Leland, Navassa, and Shallotte (near Wilmington); Rolesville, Apex, Fuquay-Varina, Stem, Youngsville, Knightdale, Holly Springs, Clayton, and Morrisville (The Research Triangle); Harrisburg and Waxhaw (Charlotte); and Bermuda Run and Elon (The Triad).

While the fastest growing municipalities were located in or near metropolitan areas, the municipalities with the largest population gains were our largest cities. All of the nine largest cities in North Carolina experienced population growth between April 1, 2010 and July 1, 2019.  During this period, these cities grew by 13.4 percent on average and added almost 40,000 people. 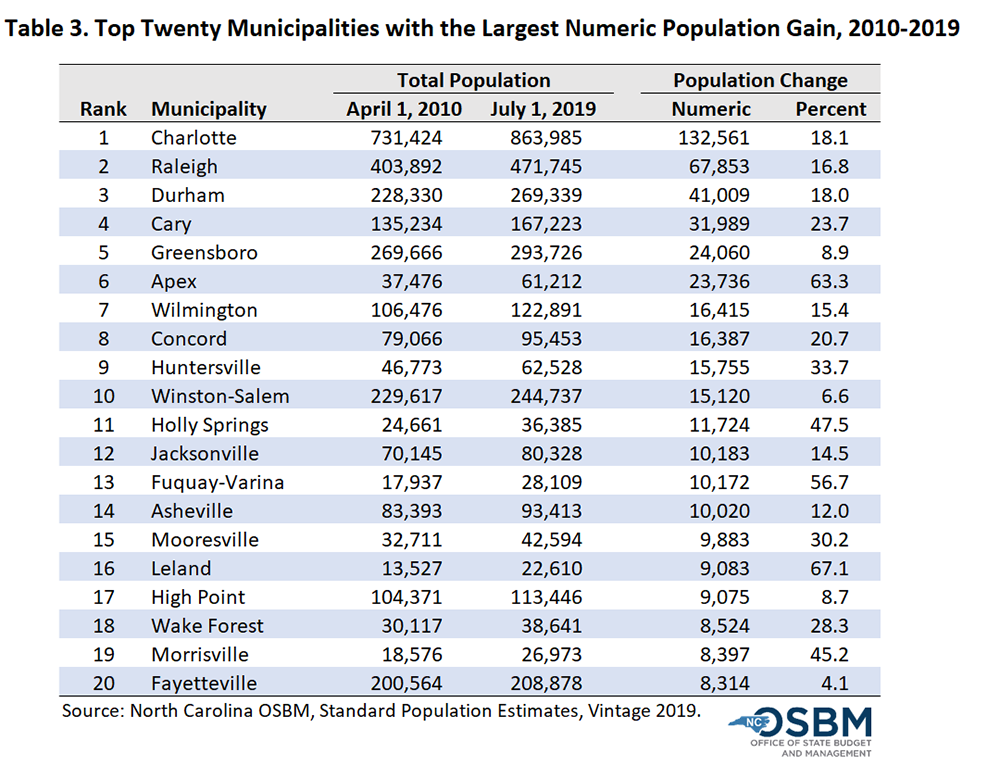 Thirteen of the twenty largest cities of North Carolina are located in the piedmont urban crescent – a region anchored by Charlotte, the Triad (Winston-Salem, Greensboro, and High Point), and the Research Triangle (Raleigh, Durham, and Chapel Hill).  This region has dominated population growth in the state since at least the 1850s when the North Carolina Railroad first connected these three areas.

The largest cities located outside of the urban crescent include: Fayetteville, Wilmington, Greenville, Jacksonville, Rocky Mount, and Wilson in the coastal plains; and Asheville in the mountains. Of the top twenty municipalities, only Rocky Mount lost population between April 1, 2010 and July 1, 2019. 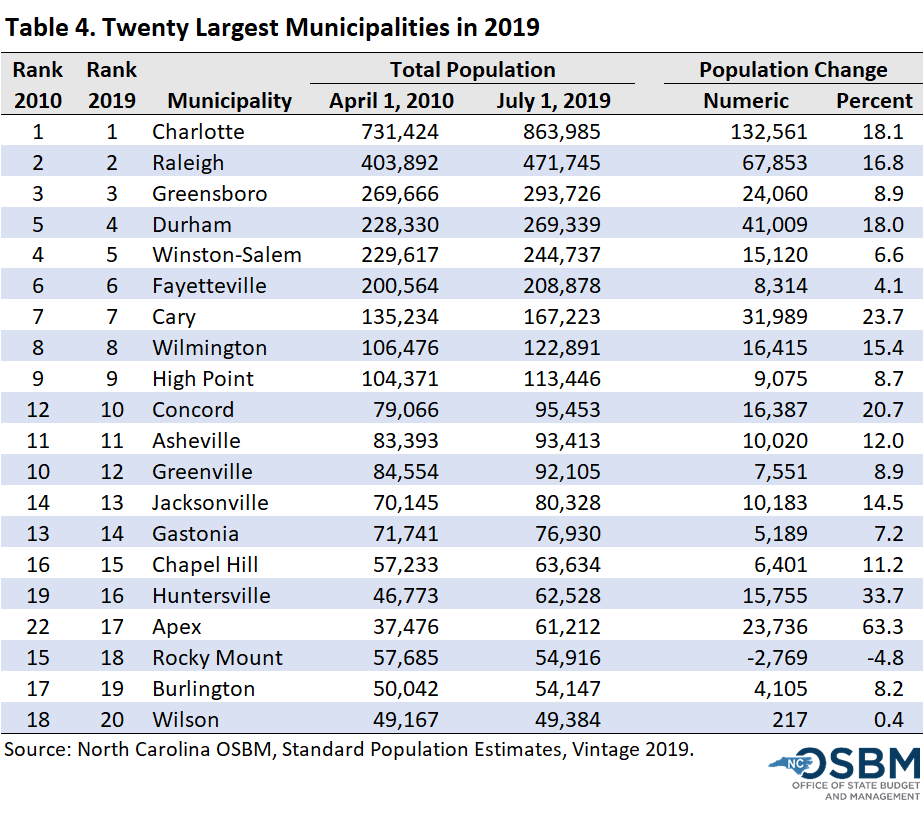 At the other end of the spectrum, only 53.2 percent of North Carolina’s smallest towns and villages (those municipalities with a population less than 1,000 people in 2010) experienced population growth during this same period (with an overall average growth rate of just 1.3 percent or 10 people).